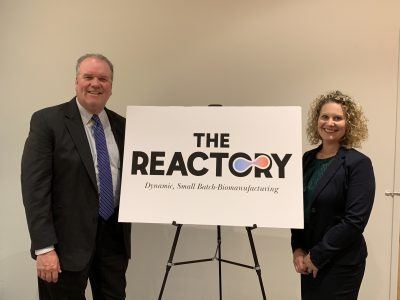 The biomanufacturing park being built at the site of the former Worcester State Hospital will now be known as The Reactory, according to landowner Worcester Business Development Corp.

The name of the facility comes after WBDC began working with Boston marketing firm Proverb to help with developing a brand and identity for the campus.

“Worcester has always been at the forefront of new and emerging industries, and The Reactory is yet another example of this pioneering approach,” said WBDC President and CEO Craig Blais, in a statement. “The WBDC believes the Reactory brand speaks to the overall vision of creating a bold and innovative ecosystem that will cultivate the future of biomanufacturing here in Worcester.”

The 46-acre site, purchased by the WBDC from the Massachusetts Division of Capital Asset Management and Maintenance in 2017 and 2018, is set to be the home of 530,000-square-feet of biotech space.

A majority of the former state hospital buildings are being demolished, but one 24,000-square-foot building, the Hale Building, will be repurposed for a biotech firm.

The eight shovel-ready pad sites are now awaiting new tenants. The WBDC is enlisting the help of Worcester-based Massachusetts Biomedical Initiatives and the Worcester Regional Chamber of Commerce to attract new tenants to the site.

So far, the WBDC has publicly disclosed just one of those possible tenants: WuXi Biologics of China. The company is negotiating with WBDC on a $60-million facility to employ more than 150 people.

It was a year ago today WuXi announced those plans. It’s unclear what final details have yet to be worked out, but the company — through agreements with the Massachusetts Life Sciences Center, WBDC and the city — could receive up to $20.8 million in financial help for the proposed facility.

The facility would be the company’s 11th drug manufacturing plant worldwide and first in the U.S.