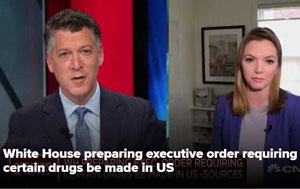 The White House is preparing an executive order which will require certain essential drugs be made in the U.S., two sources familiar with the matter told CNBC.

One of the sources told CNBC’s Kayla Tausche the order could come out as soon as Friday. The applicable time frame for reviewing the order will be 90 days, the sources said.

The administration has a wide-ranging supply chain effort underway for products in a variety of sectors seen as national security issues, including drugs, medical supplies, semiconductors and defense equipment, the sources said.

About 72% of pharmaceutical ingredient manufacturers supplying the U.S. are located overseas, including 13% in China, according to an October congressional testimony by Janet Woodcock, director of the Food and Drug Administration’s Center for Drug Evaluation and Research.

Although it is unclear whether it is the same executive order President Donald Trump’s trade advisor Peter Navarro is pushing for, Navarro has previously said he wanted an executive order that would reduce U.S. dependency on foreign-made drugs.

“This Big Pharma spin is simply a desperate attempt to stop President Donald J. Trump from moving the production of our essential medicines and medical equipment and supplies to the U.S,” Navarro told CNBC in an interview in which he spoke out against Big Pharma’s attempts to lobby against his executive order.

The executive order Navarro is planning will streamline regulatory approvals for “American-made” products and look to impose similar FDA restrictions on U.S. facilities as those abroad. It will also encourage the U.S. government, including the Department of Defense, Department of Health and Human Services and Department of Veterans Affairs, to only buy American-made medical products.