Galaxy Life Sciences to Build Facility in The Reactory 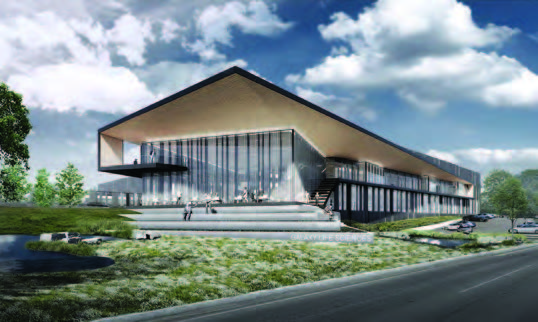 It’s full speed ahead for Worcester’s newest biomanufacturing campus, The Reactory, after the new life sciences team at Webster-based Galaxy Development signed a land deal to build a state-of-the-art clinical and commercial manufacturing facility on six acres earlier this month.

Galaxy’s purchase is the second transaction at the 46-acre, master-planned park in the last few months, following China-based WuXi Biologics’ purchase to build their first U.S. production facility by 2022. With at least two of the eight pad-ready parcels at The Reactory now claimed, it won’t be long before new biomanufacturing companies are welcomed to the city, joining the area’s already-prominent life sciences ecosystem.

About THE REACTORY
The Reactory, which sits on a portion of land from the former Worcester State Hospital, is a direct product of the Baker-Polito administration’s “Open for Business” initiative. Launched in 2016, the idea of the program was to find better uses for underutilized, state-owned assets across the Commonwealth.

After the Worcester and Westborough State Hospitals were merged to create a new, modern facility known as the Worcester Recovery Center in 2012, there was a surplus of land left on Belmont Street that was going unused. Worcester now had to decide what to do with it.

Former Massachusetts Biomedical Initiative (MBI) CEO Kevin O’Sullivan issued a white paper finding that, when it came to the life sciences field, the city was doing well in research and development (R&D) and incubation, but where the Worcester market was lacking was in biomanufacturing — almost nothing was being manufactured here which contributes to the pharmaceutical industry.

With this new call to focus for the region, the Baker-Polito administration formed a Biomanufacturing Task Force, led by Lieutenant Governor Karyn Polito, to explore establishing a biomanufacturing hub in Worcester.

As the land is next to MBI and the UMass Memorial Medical Research Center, “We thought: ‘Why not look at this surplus land to be the future home of a biomanufacturing park?’ Then we could have it all right here. The whole cluster,” said Craig Blais, president and CEO of the Worcester Business Development Corporation (WBDC). In addition to this thriving biotech and life sciences community, as the second largest city in New England, Worcester’s location and accessibility — near a number of major highways, railroads, and airports, and just about an hour to the Cambridge-Boston area — was yet another attractive selling point for the park.

With that, the Economic Development Coordinating Council (EDCC) — consisting of the WBDC, the Worcester Regional Chamber of Commerce, the City of Worcester, and MBI — submitted a joint proposal for the project and was selected and approved by the state as the first project for the “Open for Business” initiative. The WBDC was to take title of the property and handle the real estate development aspect; the city would take care of the needed infrastructure for the park-like the roads and sewer; the Chamber and MBI were responsible for recruitment efforts, attracting new companies to occupy The Reactory.

Bearing expenses for all the pre-development costs, the WBDC acquired the land from the state, developed a master plan, changed the zoning, went through the entire permitting process and designed a new public road for The Reactory. They also received a $15 million grant to legally demolish old state hospital buildings on the property. 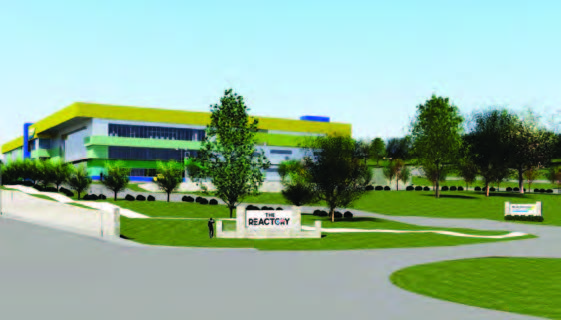 Rendering of the future WuXi Biologics Manufacturing Building at The Reactory slated for a 2022 opening.

WuXi Biologics Breaks Ground, Anchors Park
Construction of The Reactory underway, the WBDC got word of a Chinese-headquartered company to recruit. While former parent company WuXi Apptec already had business operations and R&D facilities in the U.S., independent company WuXi Biologics was looking to build their first U.S. biomanufacturing facility in the Northeast. In competition with other potential sites in the country, the WBDC submitted a proposal, and WuXi Bio signed on in 2018 to be the first tenant at The Reactory, bringing their global drug substance manufacturing facility to Worcester.

Just this past June, the contract manufacturer broke ground on the two-story, 107,000 sq. ft. facility which is expected to be operational in 2022. Though they now also have locations in New Jersey and Pennsylvania, WuXi Biologics’ Director of Manufacturing Shawn Fitzpatrick says part of the reason why they chose Worcester was for its central location and access to an educated workforce. “It was important for WuXi Biologics to identify a location rich in talent and regionally-located in an area that’s strong in biotech,” Mr. Fitzpatrick said, citing Massachusetts’ strength in pharmaceutical and biotechnology companies, and the East Coast’s abundance of potential clients.

Mr. Fitzpatrick also said the company saw the open space at The Reactory as “an opportunity to engage with the world-class institutions in the area.” With approximately 35,000 students attending the nine colleges and universities inside city borders alone, he says they “can be used as a feeder pool for talent,” which is exactly what WuXi Bio plans to do.

WuXi Bio’s Worcester facility will bring between 150 and 200 new jobs to the area across a diverse spectrum of sectors. A variety of skill sets will be needed to fill everything from entry-level to very-experienced positions, including roles in quality control, warehouse support, process development, engineering, and administration.

WuXi Bio is already working with these local higher education institutions on how students can be job-ready upon graduation; meanwhile, they’re also collaborating with Worcester Night Life Continuing Education, which has established a new biomanufacturing program for adults to start this fall in anticipation of the available jobs in the industry.

Based at Worcester Technical High School, Worcester Night Life Director Liz Tiley says the program will “utilize state-of-the-art equipment to implement both classroom teaching and hands-on practical training,” as they continue to focus on helping “close the occupational workforce skills gap in the Central MA region,” and “fulfill the critical emerging needs of our current world.”

Ms. Tiley says Night Life is “really excited to offer this short-term, affordable training program,” and “establish the foundation for an entry-level workforce pipeline into this industry.” And for those who aren’t already local students or Worcester residents, the city is aiming to retain the employees recruited by WuXi Bio. Since the city awarded them a 20-year Tax Increment Financing (TIF) plan, the company agreed to provide a housing incentive: if the employees they hire buy a home in Worcester, WuXi Bio will pay up to $5,000 toward their down payment.

Calling The Reactory a “strategic plan to build upon the successful life sciences cluster in Worcester,” the City’s Chief Economic Development Officer, Peter Dunn, says the partnership with WuXi Bio on this tax exemption is part of the city’s efforts to keep as much of the resulting economic activity and development from this park in the area.

Galaxy Gets In
Joining anchor tenant WuXi Bio, Galaxy Life Sciences announced the second land purchase at The Reactory, with plans to build an estimated $50 million, 95,000 sq. ft. flexible facility. The potentially multi-tenanted building will be designed to house biotechnology and/or pharmaceutical companies, built to suit their needs.

While the quarter-of-a-century old New England developer has historically specialized in office, retail, mixed-use, and residential developments, this land acquisition is Galaxy’s first break into the life sciences development business — making their mark in the state’s already healthy industry with the creation of the Galaxy Life Sciences arm.

In a press release announcing the land deal, Lt. Gov. Karyn Polito says, “The Commonwealth continues to be the global leader in life sciences, powering growth and life-changing innovation. The continued development of The Reactory serves to strengthen that position.”

The WBDC continues to work with the City of Worcester on all necessary infrastructure updates and construction surrounding The Reactory, and, upon completion, Galaxy says they’re considering future development opportunities on other lots in the biomanufacturing park

Its name and branding are designed to represent the forward momentum of Worcester and how the park’s innovation will respond to the changing dynamics in the biopharma industry. The Reactory signifies the heart of the Commonwealth’s pioneering approach to new challenges.

While Worcester already has a long history in life sciences — home to UMass Memorial Medical School and Hospital, other R&D facilities, MBI, Gateway Park, and AbbVie, to name a few — Mr. Blais stresses the importance of The Reactory by emphasizing what he sees as a growing need to manufacture.

“We do not do a good job in this country of manufacturing pharmaceuticals. It’s all sourced out and it’s based on price,” Mr. Blais said, adding that while it’s cheaper to manufacture in other countries, it would be concerning if the U.S. lost access to the common, necessary drugs we outsource.

“I think [those concerns are] coming to light now when we’re going to have to mass produce a vaccine. That’s going to have to be done in this country and we don’t have the infrastructure to do that,” Mr. Blais said.

As the deadly COVID-19 pandemic confronts the world and the race for a vaccine is underway, the arrival of this new biomanufacturing park is what Mr. Blais calls “very timely.” Though the WBDC and other partners responsible for The Reactory’s existence of course couldn’t have predicted a pandemic, once a vaccine is approved for market, many contract manufacturers will be needed to produce the millions of doses in demand.

“A lot of these companies are going to be looking for space because it’s going to take years and a lot of space to manufacture vaccines for the pandemic, so we’re hitting the market just right,” he added. The Reactory “puts the exclamation point” on Worcester’s life sciences atmosphere by providing that lacking manufacturing space, which he says is “overdue.

” Pointing to the fight against this virus as evidence of the importance of this type of facility, CEO of Galaxy Life Sciences Mike O’Brien says in the release, “The need for flexible and sustainable biomanufacturing in the region has never been greater. We stand ready and able to help our potential life sciences partners turn their innovative ideas into commercial products at faster-than-industry-average speed to market.

” Coupled with other significant projects happening in the Worcester region, including Polar Park, The Reactory is another major stepping-stone in putting the city’s economic development and revitalization efforts on the map.

As Worcester City Manager Edward Augustus Jr. says in the release, “The attention that this campus has drawn from the life sciences sector proves that Worcester is a burgeoning biomanufacturing destination. It is no longer a prospect of potential but a certified reality as we continue to build momentum in the City.”